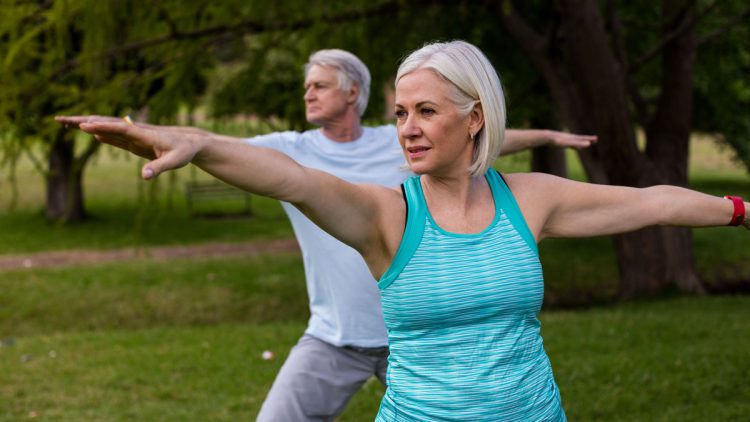 Most seniors love to stay active. Whether it’s indoors or outdoors, activity is vital in independent and assisted living facilities. With a plethora of exercises and games available across the state, we’ve hand-picked some of the best physical games for seniors.

Yoga is the perfect activity for the indoors or outdoors-man. This is a highly effective practice for senior citizens. Yoga is comprised of controlled body positions and stretches, with a goal of physical and mental well-being. The activity is perfect for participants looking to attain deep spiritual tranquility. This is one hobby that is great for the body and soul!

There are numerous health benefits for yoga participants. Weight loss is, of course, at the top of the list. With the possible weight loss comes a more balanced metabolism, with a lowering of blood sugar and blood pressure. But, that’s not all! Yoga can result in increased muscle strength, flexibility and better balance. Yoga, which is a practice believed to be more than 5,000 years old, has been shown to improve cardiovascular and blood circulation, as well.

Beginning in 15th century English pubs, this sport has constantly changed over time, but the goal has remained the same. This is one of the most popular sports to play for seniors because of its competitive, yet lighthearted nature. A player wins in shuffleboard when reaching a score of 15, but some bigger tournaments could require 21 points for a win. Alternating turns, each player slides four weights across an opponent’s board. Sliding your weights to the highest available scoring area is the objective here. Players can also knock opposing weights off the board with their own weights or use them to protect their current score.

Shuffleboard increases heart rate and reduces stress at the very same time. Another benefit is the obvious workout for various muscle groups.

A simple way to take part in the recommended 30 minutes of aerobic exercise per day is by partaking in line dancing. The sport is great for the heart and it keeps its dancers healthy and in shape. If you’re intimidated by dancing, there is no need to worry because line dancing is the perfect exercise for beginners.

There are many health benefits in the world of line dancing. Improved stamina, posture and balance are just some of the benefits. The exercise can lower stress and improve stamina in the process. Avid dancers may see a lowered risk of osteoporosis, diabetes, heart disease and high blood pressure, as well.

This sport’s history is fascinating! Dating back to ancient Egypt in 5200 B.C., bocce ball’s popularity began to soar in Greece hundreds of years later. The sport made its way to Belgium, Flanders and Holland after that. Bocce ball took center stage during the first Bocce Olympiad held in Athens in 1896. It wasn’t until the late 1980s that the sport officially took off in the United States, though. Open Bocce is the most played version of the game. Eight balls, plus a smaller ball (pallino) are shared between 2, 4, 6 or 8 players. A random player is chosen to throw the pallino first, then all participants try to get their ball closest to the pallino. The closest to the pallino receives one point after each round. Additional points are awarded when the leader’s ball is closer to the pallino than any other opponent’s shots. Once a total of 13 points is attained by one player, a winner is crowned.

Read on to learn more about increasing your energy levels as you age. 1. Exercise Every Day The amount of everyday activity you can fit in depends on your schedule. Determine how much additional time you have during the day to exercise. Any quantity of daily exercise will be good in the long run, regardless [...]

Conversations to Have with Your Aging Parents: Creating a Falls-Free World

We often worry about our aging parents’ safety, well-being and even fiscal health, and many adult children find themselves in the sometimes-awkward position of having to bring up these sensitive conversations with aging parents. Among these concerns, fall prevention may be the hardest to bring up – especially if your parents have chosen to retain [...]

Famous Philanthropist Rose Kennedy once said, "I'm like old wine; they don't bring me out very often, but I'm well preserved." With that in mind, let's take a look at some of the best aging like fine wine quotes! Aging Like A Fine Wine Quotes 1. "I told my wife a man is like wine, [...]